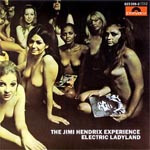 This marks the third and final album release by Jimi Hendrix, a scamp made good who achieved an extensive cult following as a guitar hero and the overt manifestation of all that was wrong with the 60's hippy movement. Hailing from Seattle, a cultural backwater notable mainly for its logging industry, Hendrix's path to fame encompassed stints in the military, which he deserted for no good reason, and then in seemingly every two-bit R&B band in North America. A move to swinging London unfortunately provided him with a platform to unleash his guitar twiddlings on the world. It was there that he also picked up his sidemen in the Experience, bassman Noel Redding and the ridiculously titled drummer boy Mitchell Mitchell. Rather tellingly, both were recruited more for the fact that they sported outrageous perms than for any musical ability. Firmly in keeping with the times is the extraordinarily crass and offensive cock-rock cover, featuring a distorted image of a bevy of nude women.

And the Gods made love opens this up with 2 minutes of warbling noise, and the first taste of the chronic sound problems that blight the entire record. On Have you ever been to Electric Ladyland Hendrix delivers a touching eulogy to his cash-strapped Electric Ladyland studio, and at one drug addled point even asks the listener if they could travel there by "magic carpet". Given its location in downtown Manhattan, it is easily reachable by subway for those gullible enough to be seduced by this blatant promotion of his own recording facilities. Crosstown Traffic, apart from promoting irresponsible driving, attempts to draw a lame analogy between commuter congestion and a stop-start relationship, although any such chaos could have been avoided if Hendrix had taken his aforementioned magic carpet with him.

Quite why Voodoo Chile is installed as the third track is anyone's guess, and an assortment of guest musicians and flunkies indulge in that most dreaded of musical misadventures - the extended blues jam. 15 minutes later Hendrix has travelled to the Moon, Venus, and Jupiter, while his listeners will probably have been no further than the nearest lavatory to relieve themselves from this self-indulgent pap. Gypsy Eyes follows, a track which took 40 takes to record thus leading to the resignation of his manager and producer. Given the lack of any cohesion between drums, bass, and guitar, perhaps Hendrix was the only one awake enough by the 40th take to realise that they had not moved on to a new song.

Both lyrically and musically Little Miss Strange is the standout out number on the record, and it is no surprise to learn that it is the only number not written by Hendrix. The brainchild of Noel Redding, its tight harmonic structure and inventive melody clearly represented a musical threat to Hendrix, and one he was not prepared to endure given it is the only number Redding was allowed on the album. Noel's fantastic guitar solo also shows he is more than a match for his bandleader when the occasion demands it.

While Hendrix can be credited with achieving a reasonable level of competency on his instrument, he is clearly over-reaching his meagre musical abilities when it comes to commanding the variety of special effects boxes he insists on employing on every riff and rhyme. Wah-wah, fuzz, and flange are cluelessly abused with wild abandon on every track, but the crippling technical difficulties with his guitar sound are never more apparent than on the unlistenable Burning of the Midnight Lamp. Presumably, Hendrix is hoping in his desperation that this comes across as a brave avant-garde experiment in sound rather than stark evidence of his own ineptitude.

Rainy Day Dream Away begins with an unhygienic guttural cough by Hendrix before precipitating into a boring refrain accompanied by a sleazy saxophone which would have been more appropriate for a Lethal Weapon soundtrack. The guitarist displays a rare moment of freakish presience on 1983 - A Merman I should turn to be, predicting both the plot outline and filming date of the classic 80's weepie Splash, although it is hard to imagine Hendrix doing a better job than Tom Hanks in his by turns poignant and hilarious attempts to get into Daryll Hannah's flippers.

A year after this release Jimi Hendrix reached the apogee of his brief career with an iconic appearance at the Woodstock festival. The passing of time has not been kind to his performance, unmasking the true ugliness of this event, a grotesquely un-American gathering of cowardly, tax-evading, unwashed ne'er-do wells, being hypnotized by a lazy pacifist flouncing about in silk scarves preaching peace and, rather ironically, harmony, instead of doing his patriotic duty and serving his country. Apparently Hendrix collapsed immediately after walking offstage, which is precisely what this reviewer felt like doing after 75 minutes listening to this album. Electric Lalaland.