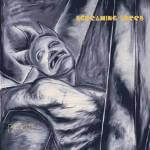 Perhaps the Screaming Trees' most notable achievement to date has been their spectacular failure to cash in on the early 90's grunge scene. Having formed in 1985, the band were well established locally when the grunge train came to Seattle, and inevitably signed with the first frothy-mouthed record-label executive to barge into one of their dingy gigs frantically searching for the next Nirvana. But despite being in exactly the right place at precisely the right time things never really kicked off for the Trees, and this, their seventh desperate grasp for mainstream attention, could be their last chance to break that duck.

Even as the CD player begins to warm up, it is immediately clear that Dust suffers from the same glaring defect as the band's previous six studio outings - namely Mark Lanegan's tragically boring singing voice. The presence of a giant and rather ghastly monster on the sleeve might suggest to the hapless shelf-browser that this album takes on a newly aggressive stance, but on closer visual inspection it is quite apparent that even this fantastical beast has been overcome by the vocalist's lethargic spell. So insufferably dull are Lanegan's vocals that this reviewer recommends donning a snugly fitting motorcycle helmet before listening, as protection against the inevitable narcoleptic attacks induced by the ordeal.

The dreary cloud does have a silver lining though, in the form of the wide variety of ingenious techniques employed by the other band members to disguise their frontman's tranquilizing effect on the audience - proving that necessity is indeed the mother of invention. The simplest of these is the "brute-force" approach, seen in Make My Mind and Witness, where Barrett Martin and the Conner brothers tirelessly hammer their instruments, flailing around like puppets in a hurricane with the simple purpose of drawing attention away from the dark motionless figure at the front of the stage. Almost as blatant, and present throughout the entire album is the "pervasive backing vocal" technique, where Lanegan is prevented from singing a note without another band member adding their own timbre to the mix - most effectively done in All I Know where the resulting backing track is the most flamboyantly camp vocal exhibition seen since the Wonderwoman theme tune.

Barrett Martin's heavy smashing of a crash cymbal at the start of every single bar in Look At You is rather side-stepping the issue by merely keeping the listener conscious through cortical shock, but is an admirable innovation nonetheless. Dying Days uses the well-known "Mike McCready" technique, with said axe-murderer throwing in an ingratiating outro solo - although this may come a little too late in the track for some of the more nap-prone in the audience. Most cunning of all is undoubtedly the "out-bore" method used to great effect in Sworn and Broken, where a lackadaisical and out-of-tune cello bravely attempts to burrow beneath Lanegan's level of insipidness and beat him at his own game. But ironically, the most effective weapon against the frontman is himself - his own dramatically off-key singing during the chorus of Make My Mind is perhaps his most intriguing vocal performance to date - at least being out of tune is somewhat interesting.

Lyrically the pervasive theme here is, unsurprisingly, depression. Lanegan clearly has a lot to complain about, obsessing over past relationships in Look At You and Sworn and Broken, bulldozing religious beliefs in Witness, and lamenting the declining state of Seattle in Dying Days - which, incidentally, he doesn't seem to realise his own complicity in. With such a vast armoury of grievances to draw upon, it is extremely frustrating that he can't find some way to channel that energy into something at least mildly stimulating for the listener.

Screaming Trees is a fitting name for a band whose dismally plaintive output would drive even a non-sentient woody perennial to insanity. Lanegan would better serve the world as a hypnotist, or better yet an anaesthetist - then maybe those poor trees could stop their wailing. Sleeping spree.