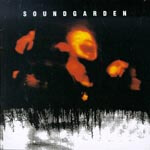 On paper, Soundgarden's line-up looks like some sort of musical dream-team, with Grammy winning vocalist Chris Cornell up front, flanked by Kim Thayil, one time Rolling Stone's greatest guitarist of all time, and Matt Cameron, a regular appearance on various top 100 drummer lists. Ben Shepherd is also back there somewhere on bass guitar. But, like a ludicrously expensive football squad freshly assembled by a Russian billionaire, team spirit goes out the window and tensions arise as each individual scrambles to stand out and be counted. With Superunknown, the power struggle reaches levels not seen in previous albums - this is not so much a melting-pot of talent, as a meltdown.

Musically, it is an album of conflict and contradictions. Cameron, in his unending self-indulgence, claims to have used different drumsets to achieve unique tones for every track on Superunknown. This is clearly a ploy, albeit a largely unsuccessful one, to mask the distinct lack of variety in his own repertoire. Even his use of pots and pans for the track Spoonman fails to inspire any kind of deviation from the standard drummer's repository. The use of odd time signatures, such as in My Wave and Fell on Black Days could have saved the day, but unfortunately the execution is wooden, and listening to five or nine beats per bar with Cameron as timekeeper is as frustrating as watching an uncoordinated toddler attempting to dribble an under-inflated basketball.

The guitar section evokes similarly vexing feelings. A litany of unnecessarily complex alternative tunings are employed throughout the album, usually in place of a good tune. Thayil, unquestionably a greater talent technically than artistically, seems to play every solo as if it were his last - tremelo picking until his fingers bleed and alas, not even stopping there. This is especially evident in the title track, where he wanders off on a tangential harangue that overpowers Cornell's vocals and lingers on until the bitter end, sapping what energy was present in the song previous to his interlude. That this narcissism wasn't called out at the production stage of the album reflects the endemic vanity in the group - each member was probably too engrossed in listening to his own contribution to notice what was going awry elsewhere in the mix.

Lyrically, Cornell's anxiety about the mounting troubles within the band is exposed, with themes of depression and suicide prominent throughout. The opening track, Let Me Drown, deals with Cornell's succumbing to the egotistical surroundings of the practice room, while The Day I Tried to Live describes a particular incident where his input was cruelly quashed despite his best efforts to rise up. Fell on Black Days continues the trend but with a slightly darker tone, and the album finishes with Cornell worryingly expressing that he Likes Suicide. All in all, it seems that most of Superunknown self-referentially bemoans the problems with making the album itself, which is both conceited and redundant - it's equivalent to devoting ten of the twelve chapters in an auto-biography to describing the dire experience of writing your memoirs.

Like most overly-long albums, this one includes some filler from the less prolific band members. Cameron's Fresh Tendrils - the album's Ringo track - is a rather nondescript grunge-fest with all the hallmarks of an early 90's garage band demo. Suffice to say, the "Ringo" reference is not purely due to his position as the drummer. Ben Shepherd also gets to try and become a productive member of the group, with his Half contribution, which is just that. Luckily Thayil has the wisdom to keep his shredded fingertips away from any kind of writing implement.

Ultimately, the jumble of sounds and mish-mash of artistic directions that is Superunknown would have been better served as three and a half solo projects. Instead what we get is a premature beginning to the end of the grunge era. Superletdown.