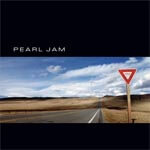 Pearl Jam's last album, No Code, bore the wrath of the musical press with widespread criticism of its change in artistic direction and curious experimentalism. Yield presents a rather meek response to those detractors, in the form of an unconditional surrender and a shameless regression to a more radio-friendly formula. Meanwhile, the boycott of promoters Ticketmaster due to ticket handling fees has come to an end, suggesting that the band's issue with said fees was not their existence (as had been claimed), but that they were too low. Either way, the free publicity garnered by the affair can't have harmed either party. The title of this album, then, is clearly a rallying cry from a band ready to bravely turn their deep-seeded culture of defiance and independence on its head.

The first challenge Yield poses to the listener is fumbling open the custom sleeve and removing the compact disc and liner notes without creasing or tearing their surroundings. Once eventually located, the credits section is seen to prominently feature a nod to bassist Jeff Ament for the sleeve design, ominously suggesting that the band consider the album's packaging as important its musical content.

The first track, Brain of J has Vedder pondering the location of the brain of John Fitzgerald Kennedy - one quick viewing of the Zapruder film would have told him that there is surely no singular answer to that question. Luckily, the listener's attention is quickly drawn from such unpleasant matters by Vedder's uncomfortable boy-soprano attempts during the chorus. The vocal tragedy continues in Faithfull with the singer supplementing the bridge section with some oral regurgitations that even Michael Jackson would be embarrassed to showcase outside of the shower. But most bizzarely, the album's lead single, Given To Fly, provides a synopsis for the classic Jeff Goldblum movie The Fly - the final line "a human being that was given to fly" giving a concise, albeit grammatically flawed, summary of the plot.

Not unexpectedly, Vedder's favourite subject matter eventually pops up - Wishlist somehow manages to contain over thirty occurrences of the first-person pronoun. Initially the song actually appears to portray an uncharacteristic humility in the singer as he describes the sort of person he wishes to be, but an unmistakable satirical undertone soon reveals that Vedder is merely exploring the idea that everyone else wants to be him. Similarly, Do The Evolution appears outwardly to be a commentary on mankind's inherent destructive nature, but on closer inspection it's apparent that Vedder's subtlety has again failed him and he clearly believes his own words as he proclaims his superiority to all living beings, races, and creeds. An unnerving interlude with the other band members singing "hallelujiah" to their leader removes all doubt as to the pecking order within the group - though it should be noted that the bass on this track is credited to Stone Gossard, indicating that Ament was either unwilling to take part in Vedder's glorification ceremony, or was up to his elbows in Pritt-stick and toilet-roll inserts while trying to devise yet another overly-complex album sleeve concept.

Musically, the formula is relatively familiar - Gossard still writes the majority of the guitar riffs, and when he runs out of inspiration Mike McCready comes in and covers the hole with some self-indulgent bluesy drivel. As usual the producer keeps each guitarist's work strictly separated on the left and right stereo channels, just as they are always positioned on stage - likely on McCready's orders so he misses out on none of the credit for the blatant musical pandering that he regards as guitar mastery.

The album does break the mould in one way with the presence of lyrical efforts from almost every member of the band, rather than exclusively from Vedder. This in fact turns out to be the nail in the coffin. The refrain in Ament's Pilate repeats the rather infantile line "like Pilate I have a dog", but a thorough scan of the New Testament by this reviewer showed no mention of said biblical figure having a canine companion. In No Way, Gossard, apparently incapable of sarcasm, tags a negating phrase to every line in the chorus, much like an illiterate teenager uses a smiley face to compensate for their inability to verbally convey humour. Finally, Jack Iron's untitled track ostensibly has such dire lyrics that the band members are too mortified to pronounce them correctly, or even sing them in tune. If these are the alternatives, perhaps Vedder's self-important hyperbole is the better option.

With Yield, Pearl Jam continue the trend of producing albums with unconventionally shaped cardboard sleeves that irritatingly won't fit on your CD shelf. Fortunately, this is one that you wouldn't want up there anyway. Paper jam.