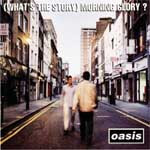 Having opportunistically hopped on the britpop bandwagon, Oasis introduced themselves to the world by releasing the fastest selling UK debut album of all time - more likely a sign of increasing music industry sales across the board than an endorsement of their questionable talent. With a live act reminiscent of an evening spent at Madame Tussauds wearing headphones, and most of the musicians exhibiting less personality than their implied wax figures, the band have relied on a manufactured rivalry between the Gallagher brothers to maintain a public presence in the interim year. Fortunately for them, Noel's crude and pubescent attempts at wit and Liam's barely more eloquent retorts provide just the kind of material the lower echelons of the media lap up, although a symbiotic relationship with the British rag industry is hardly a stable platform on which to build a career. Morning Glory then, is an opportunity for the band to prove themselves as artists, rather than "reluctant" media whores.

The album opens with Hello, a Gary Glitter cover and a first for Oasis in that they actually credit the original artist before pilfering his work - although ironically they would probably have gotten away with it this time, having butchered the song almost completely beyond recognition. What does remain intact is the chorus line "it's good to be back", shouted bullishly through a megaphone by Noel, and a rather puzzling proclamation from a band that haven't spent a single day outside the tabloids for the past year. Incidentally Noel also announces, albeit unintentionally, that he has discovered the wah-pedal and is still in the process of figuring out what it's for.

As a conceptually straight-forward rock song, Roll With it might have been a better choice as an opening track, had it been any good. Regrettably, without Glitter's inspiration the lyrical standard takes a dive at this early stage in the album and never recovers to any significant degree. In fact, Noel's verbal efficacy is at such a paltry level that any analysis of his lyrics is about as productive as arguing with a creationist on the internet. For example, the high point of this track is the less than profound "kiss the girl, she's not behind the door", which seems to suggest that the only reason not to lob one's tonsils at any random unsuspecting female is that she has built a barricade strong enough to hold you back. A noble thought indeed but, due to Gallagher's strict policy of changing the subject at least once per line, one that is never elaborated on.

Noel's haphazard assembly of random thoughts into words does have its advantages though, as the difficulty in adhering to a certain cadence and rhyming scheme is greatly reduced. This, coupled with his prodigious ability to find words that rhyme with "sky" and "shine", provides the perfect foundation for his brother Liam's extreme vocal elongation and nasal sneering. Unfortunately for the pair, cruddy singing and insipid lyrics don't cancel each other out - two wrongs don't make a right.

Musically, things have gone noticeably downhill since Definitely Maybe. Much of Morning Glory is debased by the elder Gallagher's newfound bestial craving for complexity and over-production. A heaping of instrumental overdubs and extraneous backing vocals, compounded by needless reverb and echo effects make listening to the album about as pleasant as a candle-lit dinner on the trading floor of the Chinese stock exchange. For some reason, Noel seems to think that the feckless addition of an Avogadro's number of orchestral measures and guitar dubbing tracks can somehow disguise his inability to transcend the minor pentatonic scale, and transform his nursery-level compositions into rhapsodic masterpieces.

To make things worse, it appears that Noel's Obsessive Complexity Disorder is contagious, and new band member Alan White is on the receiving end. The Mariah Carey of drummers, White seems to be of the opinion that all his drums - including the three snares - are simply there to be hit as many times as is physically possible. His irritatingly perpetual use of double-hits on the snare sounds almost militaristic, and is taken to an extreme in Cast No Shadow where the drumming track resembles the output of a Geiger-counter dropped into the nuclear core at Chernobyl. If burying the original drummer Tony McCarroll alive on the Live Forever promo video was justified, then White deserves an even worse fate.

Immeasurable levels of arrogance and self-delusion must also be present in the Creation Records marketing department - no less than six singles have been squeezed out of the ten tracks (discounting the two nameless b-side excerpts) on the album. Of these, Wonderwall is surely the one that will ultimately propel Oasis to obscure one-hit-wonder martyrdom. Thanks to a rather artsy music video and significant over-exposure on MTV, this track has already cemented the band's place in our deepest cerebral vaults alongside Stiltskin and the Crash Test Dummies. The follow-up single, Don't Look Back In Anger could have reached similar levels of success but for one crucial error of judgement - namely Noel indulging himself in taking the reigns in the vocal department, and falling so flat as to leave the listener with the disturbing feeling of actually longing for the presence of Liam Gallagher - a sensation only his mother should ever experience.

All in all, Morning Glory is the kind of grandiose self-gratifying nonsense that only imperial rock demigods can get away with, and only stratospheric levels of arrogance can justify. Certainly not something that should be attempted by a bunch of scouse schleppers at the beginning of their career. Definitely mangey.