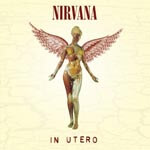 Nirvana were fortunate enough to take a relatively straightforward path to success, nurtured through their early years and first album by Seattle feeder-label Sub Pop records. Their subsequent rapid rise to international stardom was a carefully orchestrated affair, choreographed by billionaire puppet master David Geffen. Geffen's re-shuffle of tertiary band members and aggressive promotion of the band allowed them to breeze past the "difficult second album" hurdle on which so many grass-roots bands stumble. But through the haze of media adoration, stadium tours and MTV appearances, it must have been obvious to all concerned that the hurdle in question had not so much been avoided as deferred until just around the next corner. Creating a follow-up to Nevermind would present Nirvana with perhaps their greatest, if not their first, artistic challenge to date.

After just one spin of the disc, a considerable change in musical style is immediately evident and one naturally questions whether Cobain has mellowed due to his recent marriage and the birth of his first child. On further inspection, it becomes apparent that this time around Cobain isn't the only song-writing force at work, despite what the liner notes suggest. The similarity in style to Hole's acclaimed album Live Through This is no coincidence - Courtney Love is that second creative influence.

The first two tracks satisfactorily serve up the predictable Cobain grunge formula which is sure to quench the moshing masses' insatiable thirst for more of the same, albeit with a slightly more polished sound than previous releases. Incidentally, a track named Verse Chorus Verse was recorded for the album, but dropped at the last minute, presumably because this time Cobain's faux self-derision cut too close to the bone.

The effeminate Heart-Shaped Box throws up the surprise of the package, with its touching yet simple introductory guitar arpeggio and almost hypnotic layered vocal harmonies between Cobain and drummer Grohl. This is the first indication of Love's calming influence on her husband, revealing a tender side to him that he had always struggled to evoke on his own. Ultimately, Cobain's machismo prevented him from rewarding her inputs with a co-writing credit, which was clearly her due.

Unfortunately the respite is short-lived, as Cobain bares his vocal Achilles' heel and again reverts to screaming in order to keep above the escalating background din. Rape Me presents Cobain supposedly biting the hand that feeds him by taking a swipe at the record industry, yet clearly playing to their publicity tactics by including such an unnecessarily controversial song title. The self-mockery theme again comes to the fore in Dumb, where Cobain tries to convey either his own stupidity or lack of ability to verbally express himself. Ironically, given two and a half minutes of floor-time, he fails to articulate which of these it is.

At this point it almost feels like Cobain gives up on trying to convey any message whatsoever in his lyrics, and instead relies on a random assortment of Scrabble pieces and fridge magnets to cobble together some inspiration. In fact, given drearily long song titles like Frances Farmer Will Have Her Revenge on Seattle and Radio Friendly Unit Shifter, there seems to be more lyrical content in the track names than in the songs themselves.

The final "hidden" track, Gallons of Rubbing Alcohol Flow Through The Strip, sounds like producer Albini, perhaps inspired by the Infinite Monkey Theorem, locked a rabid drug-inhibited Cobain and band into the recording booth for as long as it took until they outputted something he could tack on the end of the CD as a bonus track. Unfortunately, he left it 7 minutes and 31 seconds before he realised his mistake and stopped the tape. I can certainly empathise with him, although my own suffering lasted a full 49 minutes. Still-born.