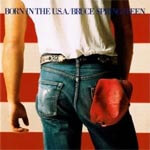 Born in the USA marks the seventh release from New Jersey songster Bruce Springsteen, self-appointed champion of the American proletariat. While the title of his breakthrough, Born to Run, might have been more appropriate for an athlete than a musician, Born in the USA also references his origin but treads safer ground by informing us of the location of this seminal event. On these 12 tracks he is again accompanied by loyal stalwarts The E-Street Band, a hodge-podge of anonymous noise-merchants.

Springsteen, or "The Boss", as he affectionately calls himself, appears on the surface at least to take his role as spokesperson for the ordinary Joe a little too seriously. However this is clearly a commercial ruse to tap into a large consumer market, albeit one with limited spending power. For the cover art of the album Springsteen lets slip exactly what he thinks of his working class audience by superimposing an image of his backside on the American flag, while cheekily donning their ubiquitous uniform of denims, t-shirt, and baseball cap.

The iconic opening beats of the title track evoke stirring memories of the Republican presidential campaign of 1984, an event with which the song is inextricably linked. It was adopted as a promotional anthem by the most noble "cool rocking daddy" of them all, President Ronald Reagan who name checked Springsteen as a paragon of American virtues. He was thanked for this gesture by a petty public denial by the singer, who while clearly delighted by such invaluable exposure and a ringing endorsement of his Americana credentials, clearly believed himself to be the true Boss. Distancing himself from his right-wing sympathies is clearly at odds with the jingoistic inclusion of the Stars and Stripes on the cover of the album, and his bragging about his efforts to "kill the yellow man", as he dubiously refers to the Vietnamese.

The number of references to place names in this album suggests Springsteen has yearnings of an alternate career as a geography teacher. He indulges this fantasy in Darlington County while he continues our education by name dropping Charlotte County in the less than thrilling Working on the Highway, which delivers on its underwhelming promise to romanticise the travails of a humble road worker. Downbound Train finds the singer wallowing in more imagined heartache and is notable only for setting in train a litany of railway references on the subsequent tracks.

The disturbing I'm on Fire, details an insatiable and darkly voyeuristic sexual appetite rather than any plea arising from self-immolation. Song-titles to inspire health and safety breaches continue with Dancing in the Dark, a hazardous occupation at the best of times, and his latent pryomania quickly comes to the fore again as we are reliably informed that "you can't start a fire without a spark". The track does however contain the most pertinent lyric of the entire album, and this reviewer could certainly empathise as Springsteen declares that he is "tired and bored" with himself. Famously, the accompanying promo video captures Bruce in dangerously tight pants, giving a freeform dance tutorial, under brilliantly bright stage lights, to an as yet undiscovered Courtney Cox.

Springsteen unwittingly provides an accurate critique of the merits of his output in the "boring stories" of Glory Days, while My Hometown ends the 47 minutes of self-pity on a suitably defeatist note. Given the outwardly fervent nationalism of this endevaour, and the unflinching pariochal content of the lyrics, it remains a mystery how Springsteen expected anyone outside the USA to enjoy this. However, he had the gall to mount a record-breaking world tour to promote an album which, rather than exalt the virtues of his working class subjects, merely constantly reminds them that their life experience will amount to no more than self-destructive subservience. Born to moan.