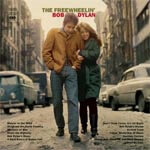 The Freewheelin' Bob Dylan is the sophomore effort from fabled troubadour Bob Dylan, a man who carved the template for cynical and soul-less exploitation of the masses. Perhaps the first manufactured music star, every aspect of his artistic persona was calculated to elevate him to folk-hero status. Tousled unkempt hair - check. Waif-like impish appearance - check. Anti-war ideology - check. Given his sterling efforts to make this album title more interesting than that of his debut, Bob Dylan, it is amazing that he still had the creative juices to think outside the box for the album artwork, which features not only himself but a token attractive blond, as well as a none-too-subtle product placement for Volkswagen. It transpires that the blond is Suze Rotolo, his then girlfriend whom he moved in with at the precise time of his "miraculous" metamorphosis from covers artist to supposed lyrical mastermind.

Blowin' in the Wind kicks things off, quickly degenerating into a seemlingly endless list of meaningless rhetorical questions. The song was instantly covered in 1963 by label-mates Peter, Paul, and Mary. Ironically this was not the last time another act would claim the definitive version of a Dylan tune. Latterly the guitar noodlings of Hendrix would usurp the original All along the Watchtower, while Guns 'n' Roses would show Bob how it's really done in their take of Knockin' on Heaven's Door.

Masters of War delivers the token anti-war manifesto, supposedly calling to task the ethics of arms manufacturers, men who also happen to be large scale employers and pillars in the defence of American freedom. Quite what the thousands of hapless blue collar grunts are to do for work when they cease making weapons to defend their own nation, Bob included, is never explained. The belligerent line "I can see through your masks" is a rather idle threat coming as it does from a man using an assumed name. Interestingly the lyrics also find the self-proclaimed peace-nik wishing death unto others, while he at one point purports to speak for Jesus Christ in what may be one of the most ludicrous moments of self-importance ever committed to tape. Unsurprisingly Dylan brazenly lifted the arrangement for this from another tune, eventually paying a paltry $5000 compensation to composer Jean Richie.

The bleak forecast promised in A Hard Rain's a-Gonna Fall is realised in that the only thing he failed to list here was his shopping. His proclamation that "I'll know my songs well before I start singing" is hardly a revelation given that the songs in question had frequently been written and recorded by others well in advance, so he would have had ample time to familiarize himself with the material before appropriating it. Perhaps one of his strongest "assets" was this ruthless adherence to the age-old folkie's blissful and willing ignorance concerning intellectual property rights. This had been exemplified in his debut album, essentially a compilation of cover versions. However, even his covers were not original given that in the 2005 hagiography No Direction Home we are informed that he stole the idea and arrangement of House of the Rising Sun from an unsuspecting "friend", Dave Van Ronk.

Bob Dylan's Blues and Bob Dylan's Dream do little other than remind us who is assailing our ears with this nonsense, although those of us with the ability to read had already gleaned this information from the album sleeve. Zimmerman is clearly trying to convince himself as much as the listener of his fraudulent identity with such self-aggrandising nomenclature. Talkin' World War III Blues details another of his drab nocturnal adventures, while Honey, just allow me one more chance appears to achieve the unique and unintentional feat of having vocal, guitar, and harmonica lines performed in three different keys simultaneously. While Dylan was no Kris Kristofferson in the singing department, it is his persistent whinings on the harmonica that is most aurally offensive.

Don't Think Twice, It's Alright is a caustic rant to an ex-lover and the song title neatly encapsulated Dylan's approach when it came to purloining the material of other artists. In it he rails "you kinda wasted my precious time" which is exactly how this reviewer felt after the 50 minutes spent listening to him. Like a Rolling Drone.